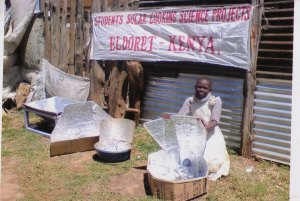 This image shows the new Hexagon Cooker as well as some other solar cookers that have been used for experiments.

The new student group has followed in the footsteps of the first project group by coming up with a new idea for a solar panel cooker.  They have named this new cooker the Hexagon Cooker.  (Originally posted in November of 2012.)